curated by Anghiari Dance Hub, Workspace Ricerca X
with the support of  Fondazione Piemonte dal Vivo
and the collaboration of  Hangar Piemonte and Mosaico Danza

In the changing political and economic landscape of the performing arts in which the artistic practices, the functions and the working conditions have been redefined, dramaturgy is regarded as an expanding field of knowledge and a terrain for challenges.

If minor dramaturgy can be considered as the common ground where the creative process, the materials and the structure of the artwork can take place, and major dramaturgy as the relationship of the artwork with its wider social and economic context, reflections on the interdependency between these scales can be raised. This allows to question both the development of artistic practices in a certain environment as well as the wider framework of cultural policy.

How these different scales, in terms of artistic tendencies and institutional contexts, interact between each other?

The symposium is an occasion to articulate urgencies on the role of dramaturg, distributed dramaturgy, and dramaturgical practices within the current performing arts and contemporary dance field by encountering different approaches proposed by dramaturgs, researchers and practitioners.

16.40 Macro Zone 2 – Dramaturgy: applications and beyond
Introduction by Carlotta Scioldo “Towards a cultural policy: between major and minor drammaturgy”

16.50 Carlo Salone “The role of space between practices of knowledge and knowledge­ in­practices: some suggestions from the performing arts”
17.10 Q&A, respondent Erika Di Crescenzo

Alessandro Pontremoli ­ – Dance dramaturgy: a preliminary approach
The talk outlines the fundamentals of dance dramaturgy (from an historical and theoretical point of view) by referring to the traditions of some professional figures (such as dramaturge and the external supervisor) and offers a reflection on their roles in the Italian contexts in recent years.

Bart Van den Eynde ­ – A rehearsal space for the director
“Dramaturgy is a flexible process. It doesn’t have a formula, it shouldn’t have prescribed roles.” says Meg Stuart in a text on dramaturgy. From the same text I also stole the title of this lecture, which is a description of hers of the meeting between choreographer / director and dramaturg.
Starting from my personal experiences as a theatre and dance dramaturg, I will use the term “situatedness” as a starting point to develop some thoughts on dramaturgy and the position of the dramaturg.

Bart Van den Eynde is a freelance dramaturge for dance and theatre productions. He has worked with directors (Ivo van Hove, Guy Cassiers, FC Bergman, et al.), choreographers (Meg Stuart, Arco Renz, Lisbeth Gruwez, et al.) and playwrights (Simon Stephens, Peter Verhelst, Judith Herzberg, et al.). From 2009 to 2012 he was the artistic & pedagogic director of Advanced Performance and Scenography Studies (a.pass), a postgraduate research program on performance and scenography in Brussels (BE). Since 2015 he is the program director of the new master theatre at the theatre academy in Maastricht (NL).
He has obtained a degree as social mediator (KULeuven & KHLeuven, BE) in 2015 and he is in the midst of a Master in Psychology (VUBrussels, BE).

Stefano Tomassini – ­ «Devora libellum» (Apc 10,9): dramaturgy and dance out­of­text
My understanding of dance dramaturgy has often been related to the idea of intensification and alliance within the relationship with the choreographer proposed by Liesbeth Wildschut. However, after the studies on the logic of the articular body by Guillemette Bolens (student of Alan Berthoz), the idea of considering movement as something related to an unusual motile and sensorial ability, in opposition to the normative logic of the body considered as shell (the body­mind), brought me to reconsider the extra­ textual, that is the relationship between body languages, texts and the unpredictability of the extra­ textual. It’s a matter of marking the limit of the textual: the text is devoured, just as with the injunction of the angel in the Apocalypse.
My case study concerns the Otolithes project by Swiss choreographer Lorena Dozio. The work takes inspiration from the language of birds and from whistling techniques practiced in different parts of the world. The choreography is not just an act of writing anymore, but an environment, a climate, an atmosphere. What is added here to the textuality is the extra­textual [hors­texte], its limit: it’s the second nature of the whistling, the possibility for the extra­textual to split the air creating a space that can only be moved by a body.
Because it is the density of the air that reveals the concreteness with which all the parts of the body will search solidarity in the movement.

Stefano Tomassini is researcher at IUAV of Venice, teaches at USI of Lugano and is consultant for the dance programme at LuganoInScena, LAC. He has been a Fulbright­Schuman Research Scholar, Scholar­in­Residence at the archive of Jacob’s Pillow Dance Festival (2010) and Associate Research Scholar at the Italian Academy for Advanced Studies at Columbia University. From 2013 to 2016 he collaborated to the dance programming at the Venice Biennale.

Guy Cools ­ – Dance Dramaturgy as a creative and somatic practice
Placing my own practice as a dance dramaturg in the still young history of dance dramaturgy, I will address the notion of ‘open dramaturgy’ as original defined by Marianne Van Kerkhoven; how the dramaturg as witness oscillates as an ‘outside body’ between proximity and distance but always has to remain invisible; and how dramaturgy always is a ‘dialogical practice’.

Guy Cools is a dance dramaturg. Recent positions include Associate Professor at the research institute Arts in Society in Tilburg, and Guest Professor at Ghent University. He has worked as a dance critic and curator and as a production dramaturg, with amongst others Koen Augustijnen (BE), Sidi Larbi Cherkaoui (BE), Danièle Desnoyers (CA), Lia Haraki (CY), Akram Khan (UK), Arno Schuitemaker (NL), and Stephanie Thiersch (DE). His most recent publications include The Ethics of Art: ecological turns in the performing arts (co­edited with Pascal Gielen) (2014): In­between Dance Cultures: on the migratory artistic identity of Sidi Larbi Cherkaoui and Akram Khan (2015) and Imaginative Bodies: Dialogues in Performance Practices (2016). Cools lives in Vienna.

Carlo Salone – The role of space between practices of knowledge and knowledge­in­practices: some suggestions from the performing arts
Starting from a non­specialist look at performing arts, my reflections focus on the edge between the traditional ways of knowing, based on the idea of accumulation of know­how as an asset, and the collective construction of a knowledge which is situated within the practices. In these two distinct conditions of knowledge production which are at the opposite extremes of a continuum, we can observe the interplay between different spatialities which involve the body, emotions and rationalities of the players inhabiting the space and transforming it into place. This contribution will try to interact with the other interventions in a dialogic way. 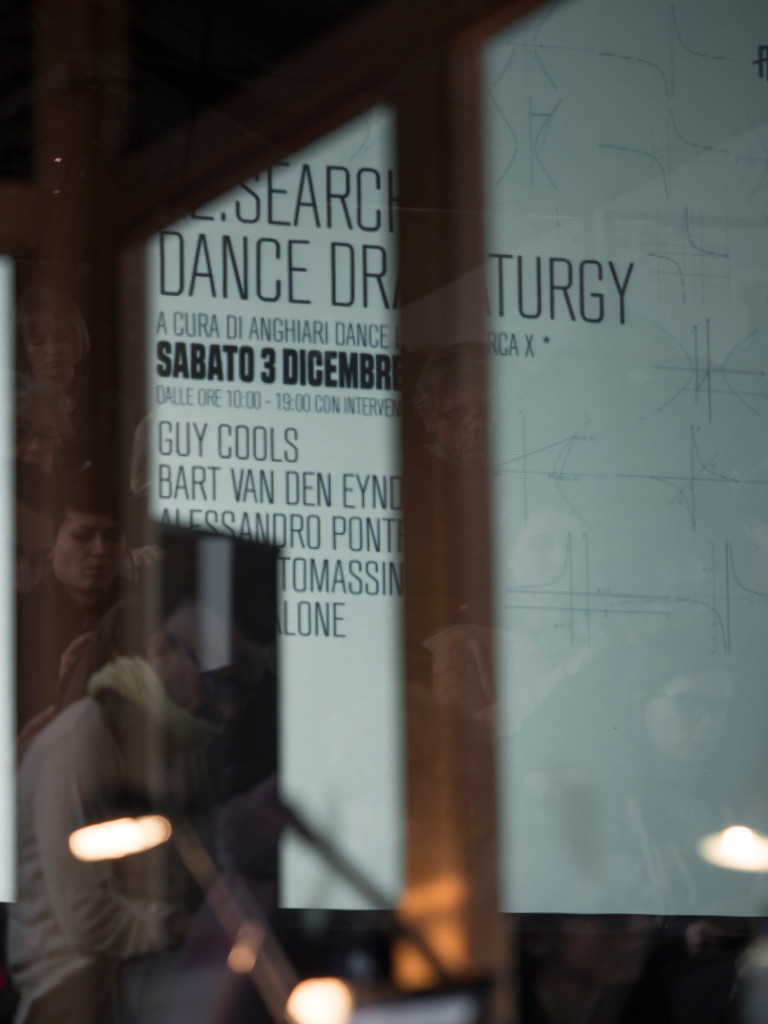